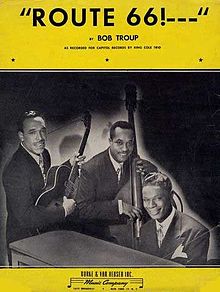 Route 66, accept being the road that goes through vast forests, prairies,desserts, towns and cities of an American dream, owns some part of its popularity to famous Nat King Cole song and of course Route 66 series with Martin Milner and George Maharis. In “Get Your Kicks on Route 66″ Bobby Troup mentions 10 cities on the route. He wrote the song while driving from Pennsylvania to California with 1941 Buick and his wife on the passenger seat.

To be honest I’ve never drove down this famous route, nor I’ve been to United States. I’ve only read about these places online, saw them in the news from time to time and dreamed how it would feel to drive through all these towns. They all have their history tales, legends and residents, who continue to live on with their hopes, dreams, problems and fears with or without the major tourist route, passing by their house. So now I just need to wait for that special day when I’ll step on the gas pedal of some nice piece of American machinery, play this song on the car radio , and get my kicks while visiting each place from this list. Presenting you the Route 66 with Nat King Cole and Bobby Troup:

St. Louis is one of the biggest cities on this list. It was founded by French in the middle of Native American land, and sold to the US as part of the Louisiana Purchase. Than whole bunch of people decided to settle here, from Irish to Germans and Bosnians. Later they decided to segregate and separate themselves. So the city that’s home of St Louis Rams, Gateway Arch and Forest Park is also home of the Benton Place, a.k.a. the first private street in US. Some people say St. Louis is one of the most dangerous cities nationwide. If you watched the news lately you realized this is not far from truth. Especially dangerous are the suburbs, like Ferguson for example, where it is possible to get shoot while walking down do street doing nothing, by dangerous armed men in blue uniforms.

At first Joplin doesn’t seem much different from Anytown, America. Actually none of the smaller cities on this list does, that’s what makes them so special. It was founded by a Methodist priest, lived its lawless life on the frontier for a couple of decades, opened a few mines and hit by few devastating tornados. Lead and zinc mines closed during Great Depression, and during the same period this city welcomed two unwanted visitors. Man and woman with guts, guns and plenty of bad attitude, who arrived in this town in their Ford V8 B400 convertible, took few photos, robbed a few banks, and killed County Constable John Wesley Harryman and Police Detective Harry McGuiness in a shootout. They forgot their camera, which left citizens of Joplin with few rare photos of this notorious couple.

Another big city, largest metropolitan area in Oklahoma and the city that had more than 10,000 inhabitants the minute after it was founded, because as part  of the “Big Land Run” more than 10,000 homesteaders took their land share instantly and start building their houses. That’s how popular this place was. Later it became a capital, elected first female mayor in the US, built up baseball park, canal with water taxis and Bricktown entertainment district and witnessed the deadliest act of domestic terrorism when a nutjob called Timothy McVeigh parked rented F-700 truck full of explosive in front of Alfred P. Murrah Federal Building.

Amarillo is the city of nicknames. During its 120-something years long history it earned more than 4 different nicknames, being the “Helium Capital of the World”, because of its rich Helium fields, Rotor City because the hybrid aircraft used by US Army is being assembled here, poetic “Yellow Rose of Texas” since the name of the town means “Yellow” in Spanish, and less poetic Bomb City because of the nearby nuclear bomb production facilities. This town also has been one of the biggest meat packing centers in the US, and has The Big Texan Steak Ranch, place where you’ll get a free 72 ounce beef steak, but only if you eat it in less than 60 minutes. There’s also a Cadillac Ranch, place with dozens of psychedelic-painted Cadillac halves sticking out from the ground buried under the same angle as Great Pyramid of Giza.

This town is in the middle of Native American country, best place to introduce yourself with rich culture of Navajo, Zuni, Hopi and other tribes, and to try your luck in their casinos. Because of its rugged surroundings, Gallup was used as film set for numerous Westerns during the 50’s and the 60’s, and welcomed dozens of film stars from John Wayne to Katherine Hepburn. They all slept in famous El Rancho Hotel&Motel. Gallup was always far from the Wild West stereotypes. Its residents used to fought to prevent deportation of 800 Japanese Americans from Gallup to internment camps.  Accept Route 66, this town has another highway which used to be called Highway 666, until former Governor Bill Richardson urged for its name to be changed, because it was possessed by Satan and cheap whiskey which drastically increased its death toll.