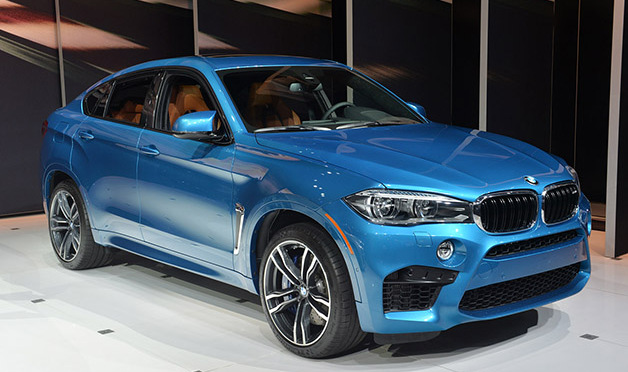 New model of this performance oriented crossover vehicle was presented on last week’s 2014 LA Auto Show.  It is one of the most powerful crossovers on the market, therefore it offers high performance in any weather condition, and on most of the surfaces. New model comes with increased power and torque output and a new transmission system. Exterior changed a lot and received numerous high performance updates from bigger wheels to bigger air intakes.

This is one of the segments that changed the most. New BMW X5 M comes with massive 21 inch alloy wheels rolled in Michelin Pilot Super Sport UHP tires, these are seen on various supercars like Ferrari 458 Speciale for example. Accept wheels and tires, this model comes with other high performance updates in its exterior, like massive air intakes for example. It is also the vehicle with one of the nicest design of wing mirrors on the market. Other typical M features are also present like quad exhaust in the back and side gills on the profile.

This segment also changed for the better with installing much bigger steering wheel and aluminum paddle shifters. New model also comes with new and much more aggressive sport seats that have fixed headrests and much more support than seats in last year’s model. Another new thing is the M-spec gear shifter.

2016 BMW X5 M comes with the same engine as last year, but this year’s 4,4 litre twin turbocharged V8 comes with 12 more horsepower and 53 pound feet of torque. New output is ranged to 567 horsepower and 553 pound feet of torque. It also comes with a new transmission system, with the old six speed automatic being replaced with the new eight speed Steptronic transmission system. This combination allows the new BMW X5 M to reach 60 mph in only 4 seconds. Another great update is that the carbon emissions and fuel consumptions are down for 20%. All this together makes this vehicle challenge some of its much more expensive rivals.

New model’s price in not going to be much different than the one from last year. Standard version can be bought for $99,650, with additional $950 for the destination charge.

This vehicle is really expensive to insure, nationwide average insurance rate for BMW X5 M is $2,300. In some states like Michigan, this model’s insurance can get as high as $3,400, while in Ohio which is the least expensive state when it comes to car insurance, to insure this vehicle you’ll need to pay around $1,500. California insurance rates for BMW X5 M are almost as high as Michigan, and there you will need $2,800, same goes for Texas.

How Much Tax Deduction Do I Get If I Donate BMW X5 M to Charity?

This is a relatively new vehicle. It is been in production since 2010 and donating some of the newer models, simply doesn’t make any sense. Anyway if your really want to donate this vehicle, for donating 2010 BMW X5 M to charity you will get $30,187 tax deduction if the charity organization sells it for its full market value. This is for the base trim level, without additional equipment, for the vehicle that has 100,000 mileage. But who would want to do that, anyway…

Only celebrity that we know off who drives BMW X5 M are Selena Gomez and Chayanne, popular Portorican pop singer.