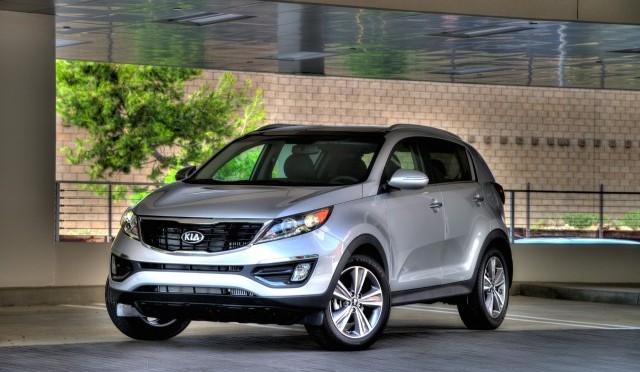 First Kia Sportage model came in 1993, it shared platform and many mechanical parts with Mazda Bongo. First model was product of cooperation of Kia and Mazda/Ford, in which latter two brought innovative technology, while Kia provided cheap labor and assembling facilities. First generation model was sold until 2004, when second generation vehicle came out, on Elantra based platform which it shared with Hyundai Tucson. Third generation vehicle came out in 2010, and it is still in production.

Exterior is one of the best features in 2015 model. New Kia Sportage looks really fashionable. It is somewhere in between crossover and hatchback. In the front the most memorable thing is famous Kia reverse bowtie grille that’s really fit in well with wept back headlights and spoiler. This model combines the size of the European hothatch and SUV height to bring us really innovative hatchback looking crossover shape.

Accept being sporty looking on the outside, new model comes with increased amount of sportiness in the interior design too. It comes with a sporty version of Hyundai Tucson interior. It comes with big gauges placed on rectangular dashboard. Overall interior is built with quality materials, lot of soft touch surfaces and great sense for details. On the other hand it looses some of the comfort due to the fact this vehicle is smaller than other crossovers in its class, so back seat can be little bit cramped during longer rides. Unlike back seat, trunk area is big enough to be compared with other other vehicles in the class. Kia offered a lot of standard features, like power windows, locks and mirrors, air conditioning, Bluetooth and USB and iPod connectivity. With EX trim level you get UVO infotainment system, optional navigation, satellite radio and eServices package.

It is really hard to predict average insurance rates for the new Kia Sportage model, but we think that insurance for this model is not going to cost less than $1,050 as nationwide average. In some states like Michigan and California you can expect to pay even $500 more, but also in Ohio for example which is the least expensive state when it comes to car insurance you shouldn’t expect to pay more than $800.

On this web page you can download owners manuals for Kia Sportage models made from 1993 until 2006.

Kia Sportage earned 2013 Standard Bank People’s Wheels award for the “SUV, Crossover-City&Suburban”. It also took few awards in Slovakia which is one of the countries where this vehicle is being assembled.

What Girls Think About Kia Sportage?