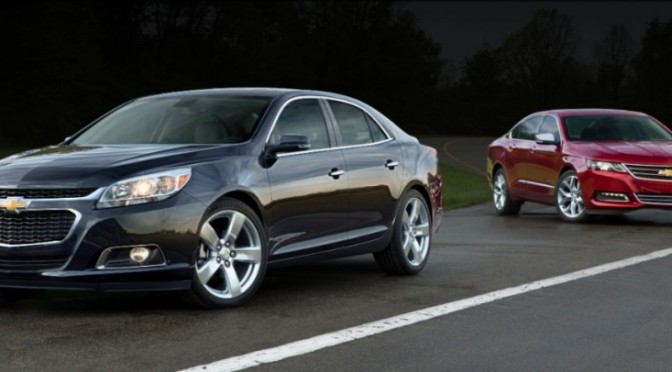 Chevrolet Malibu was produced as a trim level of Chevrolet Chevelle from 1964 until 1978, when it was promoted as the separate model line. In 1980 it shifted to the rear-wheel G platform, and it shared it with Pontiac Grand Prix, Buick Regal and some other popular vehicles of that time. Fourth generation was produced in station wagon, sedan and coupe variants. In 1983 its production was discontinued. Malibu came back in 1997, as a front-wheel drive mid-size sedan and it was based on N platform, together with Buick Skylark, Pontiac Grand Am and Oldsmobile Alero. Sixth generation vehicle came in 2004 and it was based on Epsilon platform, together with Opel Vectra. As part of sixth generation SS trim level came out. Latest Malibu is a eight generation vehicle. It is based on Epsilon II platform and it is assembled in United States, China, South Korea, Kazakhstan and Russia.

New model came out fully refreshed in 2014 model year, so for the year it only came with some minor adjustments. One of those is a 4G LTE connectivity that can be used for making Wi Fi hotspot in the vehicle.

2015 Chevrolet Malibu comes with a new two tier grille design that makes its front fascia much bolder. It also comes with hexagonal shape which is too ordinary for this class of cars. In profile and rear it has a lot of similarities with Toyota Camry, from sheetmetal wrapping around rear pillar to taillights layout.

Interior of the new Chevrolet Malibu has been praised a lot. It comes with one of the most quiet cabins in its class, and has some nice materials inside, although it also comes with a lot of hard plastics. There is enough space in the first row that comes with two very comfortable and supportive seats, but the rear seats lack enough leg room for adult passengers. Its MyLink infotainment system comes with a very nice and easy layout and 7 inch display. Also from this year it comes with 4G LTE connectivity.

Base version comes with a 2,5 litre four cylinder engine that can produce 196 horsepower. Higher trim levels come with 2,0 litre turbo-charged four cylinder engine that’s able to produce 259 horsepower. Both engines are paired with six speed automatic transmission. EPA estimates say that base version Malibu can go 25 mpg in the city and 36 mpg in the highway conditions making it relatively fuel efficient, but not the best in its class, since Honda Accord for example comes with much better fuel economy.

Mid-size sedan is maybe the toughest class to compete in and 2015 Chevrolet Malibu will have a hard time competing against Ford Focus, Toyota Camry and Honda Accord. Comparing to these models Malibu comes with slightly better interior design, but much less to show in performance section.

Insurance rates for Chevrolet Malibu go approximately from $2,300 to $2,500 depending on the trim level in Michigan, state with the highest insurance rates in the whole US. In Ohio, that’s been the least expensive state when it comes to car insurance Chevy Malibu rates go from $750 to $900.

Back in 1981, when US and Saddam were still buddies, more than 25,000 Chevrolet Malibu vehicles were exported to Iraq, to be used by Iraqi government. Those vehicles mostly ended up being Baghdad taxis, with the orange paint added to the front and rear fenders.  One of the most famous movie Malibu’s is the 1964 model seen in the Pulp Fiction, driven by Vincent Vega played by John Travolta. This is a car that belonged to Quentin Tarantino originally, until it was stolen in 1994, during the film’s production. Police needed 19 years to recover the vehicle.

What Girls Think About Chevrolet Malibu?

If you decide to buy 2015 Chevrolet Malibu accept all the technical and insurance information, you would definitely want to know what girls think about this car, and is it going to make you popular among the opposite sex. Girls that we asked about this model think it looks nice and classy, but a little bit to ordinary. Biology student from nearby dorms tells us this is her favorite type of car, and that she’s more into those with longer hoods and fire paint in the front (we guess she means sports cars). Another girl from student dorms, tells us this car is lovely for going shopping because of its spacious cabin, but falling for the guy, just because he’s driving a Chevy Malibu, simply isn’t her thing.