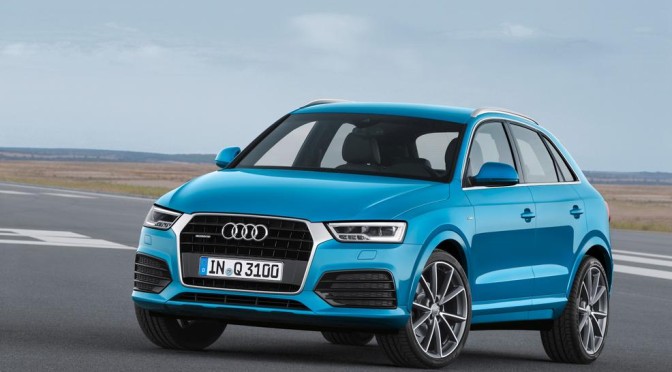 Comparing to the current model it will come with much sportier exterior look, optional all wheel drive and  stronger turbocharged engine. Main rivals of this crossover are BMW X1 and Mercedes Benz GLA Class.

New model will be much more angular and sharp looking than the current model which looks quite rounded even for a crossover. Front fascia looks angrier than ever, with the new chrome ring that connects the headlights and new lower air intakes that are placed bellow the headlights. In the back new model comes with redesigned taillights that add much more elegance to the whole package.

Audi is famous for use of quality materials inside the cabin and having nice and very detailed finish. This vehicle is no different than that. It comes with aa lot of nice looking and very functional buttons that control various features from radio to HAVC. It also has standard Audi’s MMI infotainment system, with flip up screen and controller under it. Information screen displays various data from mileage to radio station, tripometer and fuel efficiency.

Seats are very comfortable, with the front seats that are supportive and power-adjustable, and the back seats that can be folded down to the ground to provide additional cargo room if needed.

In next few years we can also expect RS models of Q3 to be promoted on American market. These models will come with larger turbocharged unit, which will be able to produce at least 340 horsepower and 322 pound feet of torque.

New model will come with only two trim levels to the American market. Least expensive trim sold in the United States will be Premium Plus which will start at $32,500, while the Prestige trim level will be more equipped and will cost $36,400.