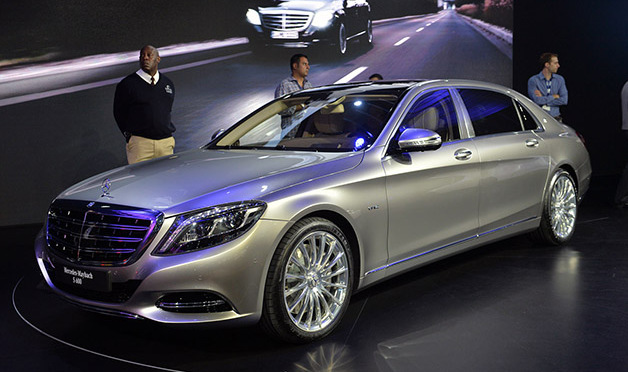 Previous Maybach was discontinued in 2002. Benz needed 14 years to make the new model, which is directed t the people who want little more style and luxury, than regular S Class models offer. New model was presented a month a go on the 2014 LA Auto Show, and since than, everybody is talking about this vehicle as one of the biggest surprises of this big car fair.

New vehicle is longer than the regular S Class model, it grew in longitude for over 8 inches. It comes with both S600 and Maybach badges on its body, with Maybach one being on the C pillar and on the trunk, while the S600 badge is placed opposite of the Maybach one on the trunk lid. It comes with standard Mercedes grill, that has some new design touches that are quite noticeable, for example 3:4 vertical chrome slats and bigger grille openings. We also noticed much bigger chrome intakes on the rear bumper and bigger wheels with much more bling than on the current S Class model. This vehicle comes with 20 inch alloy wheels.

This segment is the one when it comes to Maybach. It comes with numerous features that separates it from the regular S Class models. Mercedes put a lot of effort in making rear seat as luxurious as possible. In the back this model offers much  more leg room than the standard S Class, mostly because of longer wheelbase.Same goes for the headroom which increased from 37,4 inches to 37,9 inches, which is not much comparing to the leg room going from 6,5 to 12,8 inches, basically it almost doubled.

New model comes with increase privacy in the rear, with rear-quarter windows being chopped off and rear doors becoming much smaller. Since this is a car in which VIPs are usually being rode instead of driving it, all the comfort as directed to the rear area. Rear area is also very efficient for finishing some work tasks with 19 degree upright angle, and seat angle of 43,5 degrees. It can also become a luxury saloon, with thermo cupholders and alloy folding table with leather inserts. Rear seat behind the front passenger seat, with some front seat folding and smaller adjustments can become almost bed-like, which is very useful for long business journeys. Rear seat VIPs will also enjoy one of the quietest cabins in the whole Merc range. If you want to make it loud on the other hand, you can use Burnmaster stereo sound system with 24 speakers and tweekers that rotate for 360 degrees, which helps them to give an optimal sound impression.

When it comes to materials, Mercedes used all the goodies one luxury car can get, from wood and chrome trims to high quality Nappa leather upholstery. Whole interior look unbelievably luxurious, and the IWC analogue clock with elegant metal design drastically adds up to that.

It also comes with the perfuming system, similar to the one seen in regular S Class models, but this vehicle comes with its own perfume, made for this model only. It is called Agarwood.

It comes with the same engine as the regular S Class models, which makes this model something like a more luxurious S Class trim level. Its 6,0 liter V12 is able to make 523 horsepower and 612 pound feet of torque. It is paired with seven speed automatic transmission and it can accelerate from 0 to 60 mph in 5 seconds.

There’s still no relevant information about the price of this luxury vehicle, but we think that this baby is going to be sold for around $200,000 at least, which will make this a bargain (for the rich) considering all the equipment it comes with.

As we wrote already this car was promoted on 2014 La Auto Show and its sales are going to start in April 2015. Key markets for this luxurious limousine will be China and United States.

What Do Girls Think About Mercedes Maybach S600?