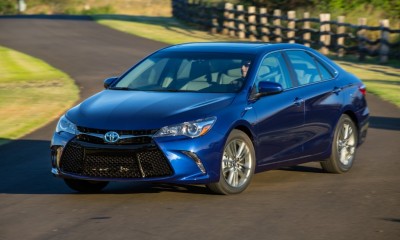 This is one of the most popular Toyota models and the second “world car” made by this manufacturer after Toyota Corolla. First Camry models were compact vehicles, but it later grow out of its shell and became a mid-size sedan, with the nineties being the transit period in which both compact and mid-size Camries were being sold.

This vehicle is part of very competitive class, that’s why Toyota needs to change it much more often and although the current Camry model was around for only 3 years, this vehicle came all new and redesigned for the 2015 model year. 2015 Toyota Camry comes with updated exterior styling, material improvement inside the cabin, more hi tech features and it has one more trim level, SE sporty version hybrid vehicle. Overall the new model comes with more than 2,000 new parts, which is quite a lot for a mid generation update.

This is the segment that survived the biggest number of changes for this model year, with the new model getting almost all new sheetmetal, accept keeping the roof from the previous model. Headlights are also changed, they get new more “swept back” design, with higher trim getting full LED running lights. Lower grille is much more open in the 2015 model, and in the back there is a line of brightwork that surrounds the taillights. Only thing we didn’t like is the glossy black surface behind the rear door, placed to make rear windows look bigger, it looks kind a tacky and to upfront.

New model received a material improvement with introduction of new SofTex suede material for the lower trim levels upholstery, while the higher and more sporty trim still come with the sale leather upholstery. Both upholsters come with better and more prominent stitching. Instrumental panel has also changed, with much bigger buttons and knobs, and the dashboard received a beveled surface that’s fitted into a central stack, that’s made with a bright trim and it looks little bit more farther outward than it actually is. One of the most important interior updates is the installment of 6,1 touch screen display, that is made for Toyota’s Entune infotainment system, that’s one of the best in this class.

This vehicle has its fierce rivals from Honda Accord to Ford Fusion and Nissan Altima.

On this link you can download owners manuals for Camry models produced from 1990 to 2007:

How Much Tax Deduction Do I Get If I Donate Used Toyota Camry To Charity?

These prices are for LE trim level models in average state, with 250,000 mileage, if your car is in better or worse state and has a different mileage, tax deduction might vary. For more information on getting tax deduction for donating your car to charity, visit this link:

What Do Girls Think About Toyota Camry?