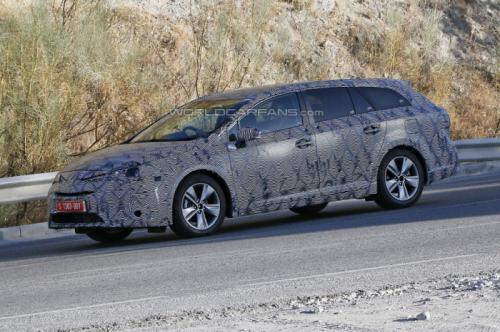 Recently number of spy photos of 2016 Toyota Avensis came out, which are the first photos of this future model. It is the first time this vehicle was tested on the regular road and it came out with bunch of black and white camouflage, so it was hard to notice any updates in exterior styling. We noticed that the new vehicle comes with improved grille design, which now looks much more prominent and powerful. Hood is also little bit longer and much more sculpted in the new model.

We don’t have too many information when it comes to this vehicle’s interior design. We hope that Toyota will keep the current design, without some of the solutions for control knobs that really don’t fit with the overall interior look of the current model. Another thing that might change for 2016 model year are the seats, at least the one in the front row, since they really lack support during longer rides and can’t be compared with the driver and passenger seats in some of the rival models.

We think that the 2016 Toyota Avensis will come with the same pair of engines. They might get minor power and fuel efficiency boost. Especially the 1,8 liter petrol four cylinder engine that lacks some more power and acceleration. 2,0 liter diesel comes with one of the best accelerations in the whole class, with 8,6 seconds score for reaching 60 mph. Than is better than both Opel Insignia and Citroen C5. Diesel engine can be combined with manual or five speed automatic transmission in the current model, and for 2016 model year the automatic version might be replaced.