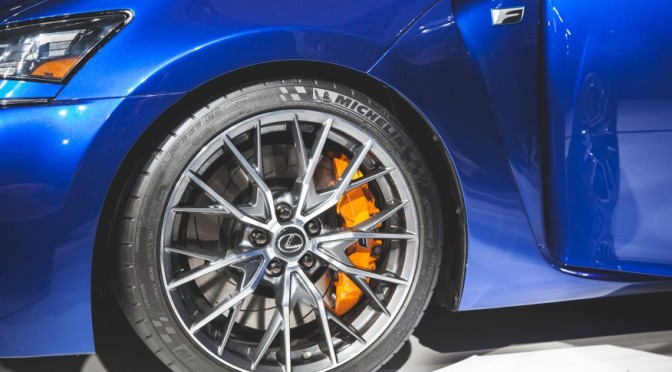 Each new model year Lexus comes with a new model turned F. This represents the sign for the high performance vehicles, that was introduced in 2008. First two vehicles that received their F version were IS and LS. This is the year for the Lexus GS model to receive its high performance version, and it is going to be presented on 2015 North American International auto show.

Under the GS range there is already the GS 350 F high performance vehicle, but the new F model is going to come with much larger and stronger engine, and probably better performance specs. Regular GS model is slotted between IS and LS in the Lexus range and the new model is probably going to have the same correlation with the two later high performance versions.

Before its promotion on 2015 NAIAS, this vehicle have been running around Nurburing testing tracks against BMW M5, which will probably be its biggest rival in the class. Spy photos from Nurburing were revealed in September last year.

New model has a lot of influences from the current RC  F model. They both come with the spindle grille, honey-comb mesh, brightwork lines that connect headlights etc. It also comes with carbon-fiber lip at the bottom of the lower grille. Unlike RC F it doesn’t have fog lamps, instead this space was used for the air intakes that cool the brakes. It also comes with redesigned LED headlights and LED running lights that look much more sharp and angular than the ones seen in regular GS model or RC F.

From the profile, first thing that we can notice are wider fenders and side skirts, it also comes with a redesigned and much more angrier looking bumpers, and powerful quad exhaust system. Accept the new exhaust, new taillights look much darker than in the regular version and it comes with the large spoiler placed on the trunk lid.

When it comes to interior, new model is as luxurious as any other Lexus vehicle which includes leather upholstery seewed with some quality stitching, and made with different interestingly designed leather pieces. Upholstery comes in black and white two tone design, and seats are very comfortable and supportive buckets that come with both heating and ventilation and large F logos of headrests.

As we mentioned earlier the new engine is going to be larger and more powerful than the ones in GS 350 F and regular GS version. We are talking about 5,0 liter naturally aspired V8 beast which is going to be able to produce 467 horsepower and 389 pound feet of torque. This engine will be paired with eight speed automatic transmission and all wheel drive which is going to come with Torque Vectoring Differential which is going to give each wheel the same amount of power. New model also comes with much stronger chassis and revised suspension. Performance figures haven’t been out yet but everybody expects this model to come with at least 175 mph of maximum speed and to be able to accelerate from 0 to 60 mph in around 4,6 seconds.

There still hasn’t been any official price information, but we think that this model will cost around $75,000 without shipping fees.

Photos found on: Car and Driver