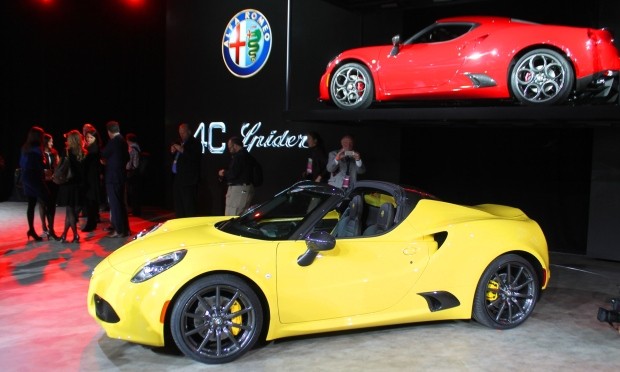 This vehicle represents sports infusion to the American market from one of the oldest and most stylish Italian sports car divisions. This vehicle had its official European debut at the 2014 Geneva Motor Show, and these days at 2015 North American Auto Show, version that is going to be sold in United States is going to have its 5 minutes under the watchful eyes of every car reviewer and enthusiasts from the country.

This car comes with a few updates on American market, including removable top, more carbon fiber pieces and parts. Although coming with all this carbon goodies, new Spider is actually more than a 100 pounds heavier than the current model sold in Europe, but the manufacturer claims this weight increase is not going to affect its performance in any way. There are also a few cosmetic changes.

New car still comes with a lot of influences from the earlier 4C coupe models. These influences are mostly present in the front area, parts like lower grille, V shaped main grille and the hood. In the back some of the elements that are transferred from 4C Coupe are Ferrari looking taillights and spoiler with AR badge.

Some of the biggest changes when it comes to exterior are the new much less conventional headlights, new wheel options, new removable roof and decklid and titanium exhaust. It got some additional carbon fiber elements made to decrease the weight and make it more crushworthy. These elements include B pillars and windshield brace.

Interior looks almost the same as the one in Coupe version, but the watchful eye of our reviewers noticed the new leather upholstery, which couldn’t be seen in the Coupe unlike: flat bottom steering wheel, TFT screen placed on the instrument cluster and driver oriented central stack. There’s also that famous cockpit look and very supportive composite-framed sports seats.

When it comes to hi tech Spider can show of with its new Alpine premium sound system, Bluetooth connectivity, USB port, iPOD interface and audio streaming.

Buyers can choose between different red and black combinations of stitching and upholstery, and there’s also a Track Package that comes with additional microfiber inserts, performance steering wheel, and carbon fiber exterior mirrors and gauge cluster.

When it comes to performance, new model comes with the same old 1,75 liter turbocharged inline four cylinder engine that is able to produce 240 horsepower and 258 pound feet of torque. This is the engine already seen in the Coupe version, but here it comes with scavenging control system, variable valve timing and direct injections above all.  Transmission is also the same as the one in the Coupe, which means it comes with TCT automatic twin dry clutch transmission system.

This vehicle is able to achieve 160 mph of maximum speed and it reaches 60 mph in only 4,1 seconds. New titanium exhaust system is designed by Akrapovic and it has a lot of similarities with the similar exhaust system seen on Corvette.

There still hasn’t been any information about this vehicles price, but we thing that it is going to cost around $60,000.