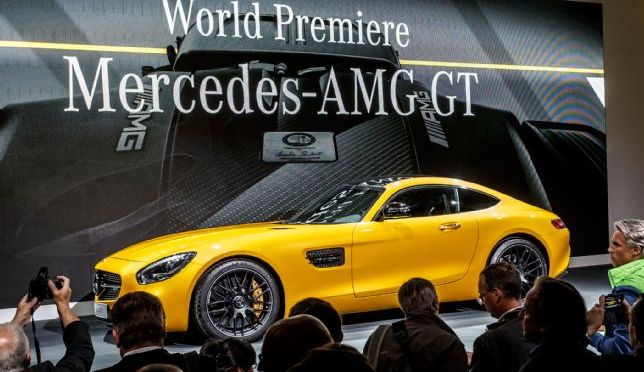 This is the first vehicle made by Mercedes high performance division, that’s been presented in the united states. We’ve seen it a month ago on 2014 LA Auto Show, where with its shinny yellow color was one of the most noticeable pieces on the whole show. When it comes to this model Merc designers sacrificed everything to increase its aerodynamics and in the end they combined it with powerful V8, making it one of the best sports vehicles out there. This model is obviously made to compete with Porsche Carrera 911, the European sports car king, but we are still not sure is Mercedes AMG GT S, is going to take it down.

Oddly enough this model looks a lot like one of its main rivals in the sports car class Porsche 911. These similarities are extremely visible at the rear end, with round lines and semi-crescent tail lights. Of course this model is not only influenced by Carrera, it also has some similarities when it comes to front fascia with another model made by AMG division, we’re talking about SLS AMG GT.

Since AMG designers sacrificed everything to give this vehicle as much aerodynamics as possible, cabin lost a lot of its space. In spite of that there is more than enough space for driver and passenger’s comfort. There’s literately no space in the back , even less than we saw in the current Porsche 911 Carrera model. Interior is made with high quality materials, but also with some pieces that doesn’t deserve to be in a luxury sports car cabin, we’re talking about certain plastic elements.

This is the segment where this model rules. It comes with the 4,0 liter twin-turbocharged V8 engine, this mean beast is able to produce 503 horsepower and 479 pound feet of torque. Previous model came with much bigger engine, and more horsepower, but with the new turbocharged engine torque went sky rocket.

New model comes with impressive handling, probably the best since the AMG division was established. It owes that to Dynamic Plus Pack and hydraulic steering. This is definitely the segment in which 2016 Mercedes Benz AMG GT S can easily compete with Porsche 911.

New model hasn’t been rated by EPA yet, but it is going to come with around 25 mpg rate in combined conditions.

What Do Girls Think About Mercedes AMG GT S?