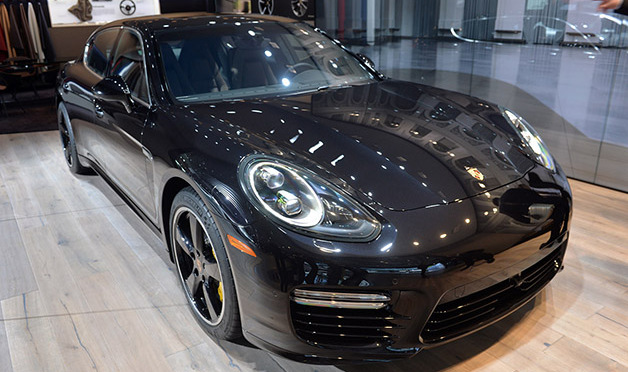 Welcome to the third and last part of 2014 LA Auto Show Debut Models presentation. Like in last two articles, you will find photos of each model together with a short summary about each vehicle. Enjoy!

And of course the photos of the prettiest girls seen on 2014 LA Auto show:

This is the second vehicle designed by high performance Mercedes division and the first model that has been presented in the united States. New model comes with a long nose and hood, short roof, tail and increased aerodynamics. Its 4,0 liter V8 engine comes with the 503 horsepower and 479 pound feet of torque output. It can reach 60 mph in only 3,7 seconds and it comes with the 193 mph maximum speed.

This model is somewhere in the middle between regular Carrera and a high performance GT3 beast. It will come as a coupe and convertible with starting price for the convertible being: $115,195 and for a coupe version: $127,095. Comparing to the regular Carrera model this vehicle comes with much wider stance, 20 inch lock wheels with black gloss finish and a four wheel drive. Under the hood it comes with the same unit as Carrera S 3,8 liter flat V6 engine with 430 horsepower output, that 30 horsepower more than a Carrera S model.

This another extension of Porsche line up. Like mentioned Carrera GTS this model is slotted somewhere in between Cayenne S and Cayenne Turbo. It is lower than S model and it comes with  much better performance. There’s not too many information about this vehicle online, on LA Auto Show it was presented in powerful carmine red color. As soon as find out more, we are going to write a full review. Regular Cayenne on the other hand comes with a lot of changes from facelift to replacing its V8 engine with twin-turbo V6.

This exclusive and high luxury vehicle comes with powerful 4,8 liter twin turbocharged engine that can reach 570 horsepower. It comes with a long wheelbase and is more than $60,000 more expensive than a regular model. Inside the cabin it comes with premium piano black or dark walnut Nappa leather upholstery and 10,1 inch displays as a rear seat entertainment. Although this is a high luxury piece its starting price of $263,900 is still a little bit too expensive.

This is one of the rare tuning models that run on electric power. It comes with modified Tesla Model S powerplant. It also comes with totally revised fascia and huge wheels. Front fascia of this model is quite controversial in the design world, since it comes with almost no grille. In the back you’ll notice rear spoiler and carbon-fiber diffuser. Starting price of this model will gr from $142,000 to $152,000.

This concept vehicle is already went to production with arranged sales outside United States. On the outside this vehicle looks a lot a like Toyota Auris. Its name stands for “Individuality” and “Modern” and its starting price will be $20,000. Production version is going to be presented on next year’s New York Auto Show.

On this link you can find a full review of Scion IM:

This vehicle comes with a new VW Hymotion system, and it is powered by hydrogen cell becoming the fierce rival of Toyota Mirai. Its engine output is higher than the one from the eGolf from which this vehicle took a lot of parts. Its Hymotion system comes with 310 miles driving distance, it can reach 60 mph in 10 seconds and comes with 134 horsepower output. VW Passat Hymotion is another VW vehicle with the same system that’s been presented on 2014 LA Auto Show.

This engine is based on regular V60 wagon, but it comes with a lot of changes that make it much more off-road capable. It comes with higher stance, fender flares and a lot of skid plates. It comes with 2,5 liter inline five cylinder engine that is able to produce 250 horsepower and 266 pound feet of torque.