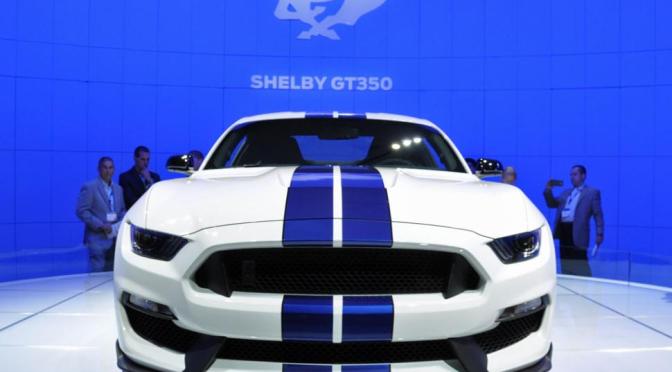 We continue with the 2014 LA Auto Show debut vehicles list, same as in the first part, you can see photos of the LA debut vehicles and read short summaries about them.

Here you can see this first part of our 2014 La Auto Show Debut Vehicles list:

And on this link you can check out the prettiest presenters on 2014 LA Auto Show:

New model comes with refreshed exterior, with larger grille, updated front fascia and redesigned headlights. Interior comes with improved materials, some new Uconnect features, seven inch display and new active safety features. Buyers will be able to choose between 3,6 liter V6 and 5,7 liter V8, and both are paired with eight speed automatic transmission. Base version can be bought for $31,395.

Here you can find the full review of 2016 Ford Explorer.

When it comes to styling, one of the most interesting new features are the two racy stripes that go across the vehicle. Another change are the 19 inch alloy wheels. Performance segment is updated with 5,2 liter V8, that is able to produce more than 500 horsepower and 400 pound feet of torque, which means that this is one of the strongest engines in Ford’s history. It  is paired with six speed manual transmission and flat crankshaft and few other miracles made by the Ford engineers maximize this engine’s output.

On this link you can read a full review of 2016 Ford Mustang Shelby 350GT.

Company founded by eccentric Danish businessman is back in the car industry. This time Henrik decided to rearrange 2015 Ford Mustang in cooperation with Galpin Auto Sports. They are going to make full carbon fiber Mustang, called the Rocket, nd they also like the cll it “Ultimate American Muscle Car”.  Like the muscle cars from the sixties, this vehicle is going to come with hexagonal grille, long hood and custom silver paint. It is going to come with powerful 5,0 liter V8 engine, with725 horsepower output.

Two versions of F Type vehicles are going to be presented on 2014 LA Auto Show. Manual version already became speed freak’s favourite. AWD model is going to come with 3,6 liter V6 engine and 380 horsepower with the base model and with the system that sends all the supercharged engine’s torque to the rear axle. R version comes with much higher 550 horsepower output.

Here you can find full review of 2016 Jaguar F type.

New Lexus vehicle comes with combination of the wild looks of LF-LC and grounded RC styling. In addition to all these this model received famous spindle grille that we often see on Lexus models and full LED running lights. Interior is covered with grey-white leather, which gives this an elegant interior design to this concept vehicle, together with dual screen centre stack.

New small crossover shares a lot of parts and styling features with Mazda2 hatchback. Under the hood there’s a 2,0 liter four cylinder engine combined with automatic transmission and front wheel drive, although the all wheel drive is avaliable if you pay extra for some higher trim level.

Another Mazda crossover that’s presented on this year’s LA Auto Show. Exterior design is not much different from the old model. Performance segment also didn’t receive too many changes, with 2,0 and 2,5 liter four cylinder engines that are basically the same as the ones we saw in last years model, accept 2,5 liter getting little bit better fuel economy.

This sedan received its first update since it was introduced in 2012. It comes with redesigned headlights, new grille that comes with border lightnings and emphasized horizontal slats. There are a several new colors to choose and 19 inch alloy wheels in the base version. Inside it comes with more tight panels, Mazda Connect infotainment system and 7 inch touch screen display.

Mercedes decided to play it safe with the new Maybach limousine, making it the more luxurious and stretched S600 model. New vehicle comes with one larger leg room in the back seat that a regular S600, throw pillows and a powerful V12 engine that comes with 572 horsepower output. On the inside it is one of the quietest luxury sedans on the market, it comes with premium leather upholstery and a real wood trim.

On this link you can find the third part of our 2014 LA Auto Show Debuts list: