First model was built in the end of the fifties, when Ford’s and GM’s pony cars were already ruling the market. First model was in production for only few years. It was only sold in silver paint and it was called Dodge Silver Challenger. First model was a club sedan, with some luxurious features for that time, including electric wipers, premium Manchu upholstery and wall-to-wall carpeting. After 10 years pause in 1969, the first generation model came out, which was much more similar to the vehicle we know today as a Dodge Challenger. it was based on the Chrysler E platform and it was related to the most popular Chrysler pony car at that moment, Plymouth Barracuda. While ‘Cuda was in production for a long time before first generation Challenger arrived, it had an ongoing rivalry with Mustang and Camaro models. Dodge’s first muscle car on the other hand was at first presented as the most powerful muscle car on the market and it was opposed to other little bit more powerful pony car models like: Pontiac Firebird and Mercury Cougar. Time when first Challenger model was released was very critical for the pony car class, which was in constant decline. That’s why the first generation model was produced only until 1974, with a constant decline during all production years accept 1973, when more than 27,000 units were sold.

After 4 years long pause in 1978 second generation model came out. It was a rebadged version of Mitsubishi Galant Lambda and in other world markets it was called Mitsubishi Sapporo.

Third generation and the most successful line of Challenger models came out in 2008. First model was promoted on the 2006 Detroit Motor Show. New generation of this model that’s still in production came with a lot of retro exterior styling elements, taken from the 70’s models. One year later this model received its famous two stripes across the hood, roof and trunk lid. With this vehicle Dodge brings vast number of updates in every new model year.

New model was presented on a 2014 New York Auto show and it came with facelift that was anticipated for a long time. Its true that new Charger came with much more changes when it comes to exterior, but updates that we see on last Challenger models are more than enough to keep it competitive for the next few model years, with other pony cars on the market. It came out without any drastic changes in performance section, which left enthusiasts little bit disappointed since they were expecting something bigger for the 100-year anniversary of Dodge brand.

Most of the updates that we see on the new model came directly from the seventies, and were inspired by the 1971 model look. Some of those updates are split grille, little bit longer and much more emphasized hood and  separate taillights in the back. Its new grille comes with the chrome accents and LED Halo lamps. Large trapezoidal intake that we can see on the bumper was placed upside-down on the new model, and the hood comes with the large Shaker in the middle. In the back new model comes with bigger trunk-lid spoiler, reshaped bumper and already mentioned separated taillights that are placed on the glossy black background, same as in 1971 model.

Interior was also changed and made more similar to the deign we remember from the seventies and famous 1971 Challenger. Main novelty is the new redesigned central console that that was made with 1971 theme and it is paired with driver focused instrumental panel. It comes with 2 displays one being 7 inch TFT instrument cluster screen and the other 8,2 inches display for the infotainment system. Cabin looks much more premium now, with a new aluminum inserts and leather wrapped elements. There are few different packages when it comes to upholstery, from premium cloth to Alcantra suede and premium Nappa leather. There’s also the most premium combination that features Nappa leather upholstery with heated and ventilated seats in both rows.

2015 Dodge Challenger will come with the same engine we’ve seen in the previous model years. this is a little bit disappointing since we expected something new and powerful following the new Hellcat promotion and the 640+ horsepower engine that we’ve seen under its hood. So the base SXT trim level and the SXT Plus are going to be powered with 3,6 litre Penstar V6 engine that is able to produce 305 horsepower and we’re going to see two V8 engines in the higher trim levels with 5,7 and 6,4 liter capacities. 5,7 liter HEMI V8 i going to produce  375 horsepower and 410 pound feet of torque, while the 6,4 liter V8 is going to be rated at 485 horsepower and 475 pound feet of torque.

New model comes with completely new transmission system, with the 5 speed automatic being canceled in favor of new eight speed TorqueFlite transmission system. With this update 6,4 liter can reach maximum speed of 182 mph and it can go from 0 to 60 mph in only 4,5 seconds.

In the pony car class everything went down to three vehicles, the model we write about here is one of them, and the other two are of course Ford Mustang and Chevrolet Camaro.

One of the best movie appearances of Dodge Challenger, which rose this car to stardom was a role in movie called Vanishing point, about a guy who tries to deliver 1970 Challenger model from Chicago to San Francisco in only 15 hours. We can also see this car in popular series Breaking Bad, as a present that Walt gives to its son Walter Jr., and than later burns it on the parking lot. This pony car is driven by many famous people including: Whiz Kalifah, Julio Jones, rapper TI, Chace Crawford, Jesse McCartney, Dwayne Wade, Udonis Haslem etc.

What Girls Think About Dodge Challenger?

Coming as soon as we got the first answers! 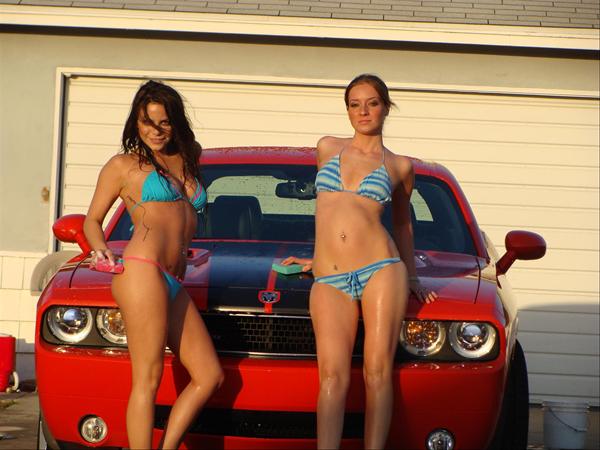