New 2016 model is caught by spy photographers few times this year. First it was seen testing in South-Western dessert, and later it was photographed near Ford headquarters in Dearborn, Michigan. On both testings hood and front fascia were covered, so we should expect some changes in that area. On of the biggest exterior changes for 2016 model year will be the introduction of aluminum panels on the next model’s body. This truck might also come with the new shocks in the 2016 model year, since we can’t see the usual blue-chrome combo on spy photographs.

We still can’t find any photographs, spy or teasers on the Ford Raptor interior design for the 2016 model year. Stay tuned since we expect some new information to come until the end of this year.

Spy photographers saw some changes on the new Ford Raptor model, but one of the biggest change will be under the hood. Photographers witnessed that the sound of the Raptor’s engine on these test drives didn’t sound like its old 6,2 liter V8 engine. It sounded more like a large EcoBoost. If this proves to be right, we will see the first turbo-charged pickup truck. We expect new model to come with EcoBoost at least 3,5 liter big and more powerful and fuel efficient than last year’s V8.

Since the  Ford Raptor rolled on its first test drive, everybody knew it is going to be special. This is the only performance oriented pickup truck on the market and its facing huge success. While writing this review I used Google Keyword Tool to check the proximity of searches for the terms I will write about. 301,000 people searched for Ford Raptor this month, which is more than double that regular F150 gets. This is by far the most googled pick up truck in the world. Its competition literately doesn’t exist, but we think that before 2016 Ford Raptor comes out, RAM and Chevy will definitely think of something. There were some rumors that RAM will upgrade its 1500, and made a performance version, same as Ford did to F150, when making Raptor.  Another vehicle that can somehow compete with Raptor is the Callaway Silverado, although we are not sure is it going to come out in 2016 model year.

Both price and release date for this model are still unknown. some online reviewers think that the new model is going to come early, maybe even as early as this autumn’s LA Auto Show. If we don’t see the new model in Los Angeles this year, we will definitely see it on next years Detroit Motor Show and we can expect it arriving into the showrooms around November next year. Price of the new model is definitely going to be higher, since it is going to come with a lot of changes in performance and exterior segments. Last year’s model could be bought for 50 G’s.

Among the celebrities Ford Raptor is as popular as the Cadillac Escalade. Among celebrities who own this truck are: Bubba Watson, who owns a bullet-proof version, Jesse James, car celebrity whe definitely knows a good truck when he sees it, George Kottaras from Cleveland Indians, Ryan Shackler, famous skater who uses hist truck as a skate ramp, John Marey, Heidi Klum, Prince Jackson, Scott Disick from the Kardashians, few race drivers like Ken Block and Ken Conway and many other celebrities we don’t know about.

What Girls Think About Ford Raptor?

I asked few friends about this truck and they think it looks powerful and fun especially for the people with adventurous spirit. They think it would be really fun to ride it around some off-road terrain or sand dunes. Since this truck is one of the most most capable off-road vehicles on the market, girls nailed it one more time. 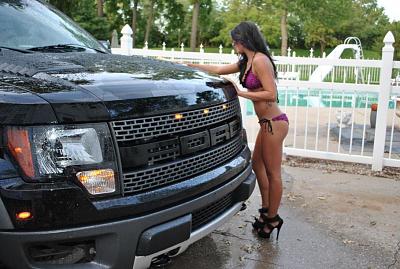